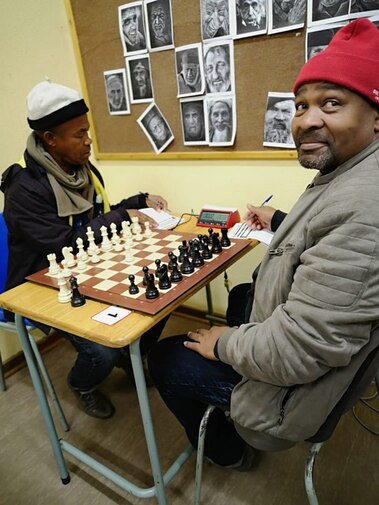 Every chess tournament hosted in our wonderful city brings with it, excitement, prestige and honour. This tournament being one of the few Fide rated tournaments in our chess calendar, was one I really wanted to win, not only for my ego but to prove that I have been working hard on my chess. The first day was really confusing, I didn’t know about the various sponsors that contributed towards the tournament namely an anonymous sponsor which I still believe is Bill Gates, Ster-kinekor and Domino’s Pizza. I believe it’s safe to say because of these sponsors we know where my hunger and imagination came from; I somehow thought we’d receive free food during the tournament and maybe a free movie ticket if we achieve a podium finish but I was mistaken and not having breakfast that morning was proof of that error. The sponsors however did provide really cool stuff like; Free popcorn, free eye tests, free pizza to those that finished on the podium in the schools section and of course, the incentive that makes the world go round, our lovely prize fund. All in all the stage had been set for players to exhibit their best chess possible with more than enough motivation to finish strong. I didn’t come into the tournament with much pressure seeing that I was no longer the NC no.1 CHESSA rated player, the joys and responsibility fell on my colleague Xolani Mathebula. Xolani and I carefully plotted our climb to the podium but in order to achieve our master plan we had to dethrone the NC no.1 Fide rated player, Mr Alfred Pesa, you’ll hear how successful our endeavour was in a latter paragraph.

The tournament started on a ‘One of the greatest kings to walk the earth’ note, you know who I’m talking about, King David of course, with David being one of our rising stars Tshenolo Motsamai and unfortunately Goliath was our third seed Itumeleng Valashia. Tshenolo displayed one of the finest understandings of a Queen endgame with a pawn on the brink of promotion, it was a formidable display of his endgame skills rendering his opponent helpless against his rather patient king advance of which finished the game in the most accurate way possible. The before mentioned might be thought as the game of the tournament by some but that privilege fell on our National no.1 and our International no.1, Xolani and Mr Pesa. It was a clash between our Northern Cape giants, a nail-biting affair between titans and not to mention an opportunity for Xolani and I to realise our endeavour for a spot on the podium. Where was I in the midst of all this tension? I was crushing my opponent while listening to my heart race against the palpable atmosphere created by their clash. I had to wait till the game was over to ask both players, when did they join the naked kings club? Because both kings seemed to be defenceless but as the late Mikhail Tal described it, we must take our opponent into a deep dark forest where 2+2=5 and the path leading out is only wide enough for one and so it was, Xolani being the one who emerged with a huge material advantage but not in the classical sense. He sacrificed his Queen! Yes Xolani sacked his Queen for an overwhelming material advantage. I can’t imagine the look on Mr Pesa’s face, even in the face of mortal danger, the old man realised that his opponent was in time trouble and swiftly played the most threatening moves on the board. Xolani got backed into a psychological corner, whether to play out the game and risk losing because of his time constraint or accept the bluff proposed by Mr Pesa, which was a draw offer in the face of doom. The old man prevailed in his efforts to achieve the draw but only because the young champion underestimated his position in the final stages of the game and settled for a draw instead of fighting through to obtain the sweet nectar of victory.

​All things considered, the tournament had its highs and lows but the climax came at the final round where the players on the top 3 boards were fighting for a podium finish. This is the point in tournament where players need to have nerves of steel and a tunnel vision so that they can finish strong. The final round didn’t stray away from the thrilling nature of the tournament as Xolani and I faced off in one of my most dubious displays on the chess board nevertheless I clinched the victory.  Mr Pesa on the other hand kept his head and completed the tournament with an impressive score of 4.5/5 to cement his dominance in 1st place. I completed the tournament in 2nd place and our queen sacrifice hero, Xolani, came in 3rd place. The tournament proved that our province is growing in strength and all the hard work the organisers put in over the years is finally paying off. To the players who didn’t meet their intended goal, there is always another opportunity on the horizon and remember check is not a mate.